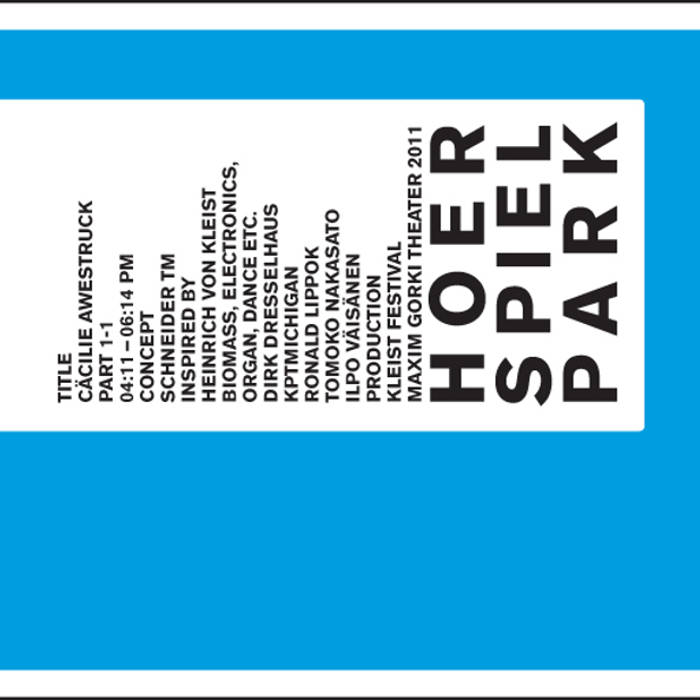 “... the pillars of the building shook and the windows, misted over by their breath, clattered together, as if heavy handfuls of sand were being thrown at their surfaces, threatening to break.”

From the 20th until the 21st of November 2011, from 4:11 PM until 4:11 PM at Maxim Gorki Theatre and Marienkirche, Berlin:
Dirk Dresselhaus, Michael Beckett, Ronald Lippok, Tomoko Nakasato and Ilpo Väisänen played a 24 hour concert which ended on the hour of Heinrich von Kleist‘s death 200 years ago. Of those 24 hours, 19 hours and 17 minutes were documented and are now released entirely in this edition.

Prior to this, Schneider TM visited Kleists grave, from which he took a wooden stick home, which then lay in his kitchen for more or less half a year, when he had the following idea: This stick is Kleist`s biomass, which over the course of 200 years has been transformed into vegetable matter. Why not use this stick, which once was Heinrich von Kleist, to generate an electroacoustic bio-Mass? Wood, leaves and earth were then collected from the grave, equipped with contact mics and transformed into raw sample material, sound objects and tools with which to treat guitars, metal plates and cardboard boxes.

The concert is based on the last 24 hours of Kleist and Henriette Vogel‘s lives and Kleists tale “St. Cecilia, or the Power of Music“ in which four brothers initiate an iconoclastic riot in the local monastery of St. Cecilia, Aachen, during the 16th century. They occupy the monastery with the aid of a mob, just as Mass is about to be held. The destruction of the monastery seems inevitable when suddenly the organ, choir and orchestra begin to play. The music has an imense emotional impact on the four brothers, who prostrate themselves before the altar. The mob falls silent and the church is saved. However, afterwards the four brothers are admited to a lunatic ayslum in which, day by day and year by year, they belt out Gloria In Excelsis Deo every midnight for a duration of one hour. Besides this they sit in silent prayer.

The electroacoustic bio-Mass at the Gorki Studio was transformed into a self-generating loop and left by performers and audience for an hour between midnight and 1 AM. It relocated and continued as an organ concert in the Marienkirche, conducted via the movements of dancer Tomoko Nakasato. During this time, a version translated for a modern audience of the “Gloria in Escelsis Deo”, which, in the horror-scene of Kleist’s story, opens up the sky above the two protagonists, was performed. After this, the concert returned to the Gorki Studio, where the prayers of the four brothers were musically reproduced in the style of Kleist and Vogel’s final 24 hours alive, as they ate vegetable soup and drank coffee, rum and red wine together.

This piece of music was the first rehearsal session for this project.

A recording of the whole concert was released by Hoerspielpark as download and CD - box set on demand: