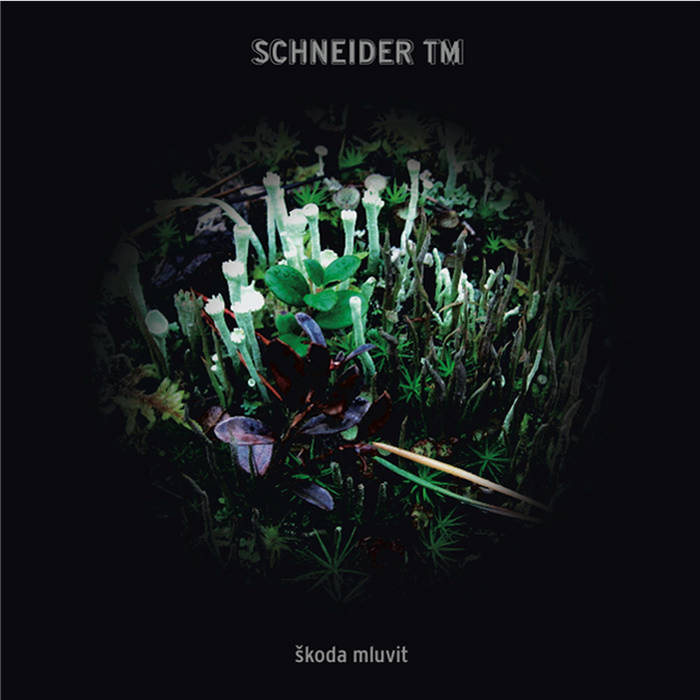 Škoda Mluvit is the 3rd regular Schneider TM album and was released in 2006 as CD & Double Vinyl by City Slang.
This was the official release-info written by Wyndham Wallace:

From the outside, Dirk Dresselhaus’ apartment is much like any in the Prenzlauerberg district of Berlin, housed inside a hulking, grey, pockmarked exterior that towers five tall stories above the cobbled streets. It’s different inside, though. In the room he uses as a studio, but which also doubles as his living space, a drum kit has been erected, though it sometimes doubles as a keyboard stand. A huge desk is filled with electronic equipment and guitar pedals linked together, all threaded through an antique mixing desk. There are guitars lying on the floor and spread across chairs and sofas. On the floor are a variety of strange wooden objects, elaborate traditional instruments that resemble wild variations on a xylophone.

This is the room that, for two years, played womb to ŠKODA MLUVIT, a remarkable album that sees Dresselhaus – known to friends and fans alike as SCHNEIDER TM – continue his unusual journey through the netherworld of ‘indie’ and ‘electronic’ music. It’s a room that SCHNEIDER, on occasions, didn’t leave for days at a time, locking himself away whilst he tinkered with and poked at anything he could find that made a sound. He calls it Constructionsite Studios – not because it looks like it’s currently being renovated, which frankly it does, but because he is constantly surrounded by the sounds of construction as workmen continue the repairs to the delapidated buildings of the old East Berlin. You can hear the noise in the dying moments of SKODA MLUVIT, hidden away as a secret track.

ŠKODA MLUVIT is an album that encapsulates all the things that have led to SCHNEIDER TM being one of the most unusual but respected artists out there. He hovers between pop and avant-garde, as comfortable being compared to Matthew Herbert as to the Pet Shop Boys. Perhaps that’s why Zoomer, his last album, didn’t achieve quite the stratospheric commercial success that critics had earmarked for it: people simply didn’t know where to place it. SCHNEIDER, after all, is just as likely to discuss extreme noise bands from Japan as he is West Coast hip-hop.

This still shows on ŠKODA MLUVUT, but the times have caught up with him: electronic musicians are integrating acoustic instruments into their music with such fervour it’s become almost as much of a cliché as when indie rock bands added “a dance element” to their sound in the early ‘90s. But the thing here is: SCHNEIDER doesn’t actually know what he’s doing. He just can’t help himself. So the thoroughly uncontrived results include the lethargic acoustic funk of “Peanut”, the distorted noise of “S’Kcorratiug”, something that SCHNEIDER describes as Fela Kuti mixing Neil Young’s Greendale with the blues (“Vodou”), the twisted hip hop of “The Blacksmith”, the sweet soul melody of “Cataractact”, the whorl of sound around “The Slide” and the utterly undefinable “A Ride”.

On the album sleeve, SCHNEIDER lists every single thing that he used as source material for the sounds that make up his album. But this is misleading. You wouldn’t expect sailing trousers, a cigarette lighter, a pool table or paper to have played a part in this brilliantly playful, if elaborate, collection of warped but brilliant pop. But then again you wouldn’t expect Fela Kuti and Neu to collide with such grace, or Sun Ra and Teenage Fanclub to gel so elegantly. SCHNEIDER is a master of unusual concoctions – that is no doubt why he originally came to so many people’s attention when he and long time collaborator Kpt Michi.Gan. covered The Smiths’ “There’s A Light That Never Goes Out” to such devastating effect on their sublime electronic version, “The Light 3000”.

On ŠKODA MLUVIT he continues a journey he began with Moist in 1998, when he turned his back – initally temporarily – on his successful indie act, Locust Fudge, and a developing career as a VJ on German TV. Initially he indulged himself in the extremities of sound that electronica opened up to him, but slowly he began to integrate his indie roots into the songs, resulting in2002’s Zoomer, a masterpiece of what was dubbed “indietronica”, packed with off-kilter pop nous – “Frogtoise”, inspired by animal surgery experiments carried out in Dresselhaus’ dreams; “Reality Check”, a brilliantly subliminal protest song – and sonic exploration that he dubbed “chemical listening”.

ŠKODA MLUVIT sees him combine all the different elements of his musical interest to even greater effect. But it’s not just about how he recorded, or what he recorded with, so much as why he recorded, that lies at the heart of ŠKODA MLUVIT’s genius. Following the release of Zoomer, SCHNEIDER TM – accompanied by his trusty cohorts in the SCHNEIDER TM EXPERIENCE, KPT Michi.Gan and Mek O’Baam – made his way around the world. They criss-crossed across the whole of Europe, taking in unusual dates on a Goethe Institute sponsored tour through southern and eastern Europe; they traversed America, including a lengthy tour with The Faint and Les Savy Fav; they performed in Japan; they played in Brazil. They broke down at midday in non-air conditioned vans in the desert whilst tripping. They stayed up all night so as not to waste money on feculent hotel rooms. And they partied hard. This had its upside, like the night their van was broken into, something far more bearable under the soothing effects of ecstasy. But it had its downside. The downside was that it had to end. And when it did they were incapable of dealing with the sudden stillness. And that, says Dresselhaus, is when things started going wrong.

What happened is irrelevant. As SCHNEIDER’s Czech grandmother would say, “Skoda mluvit”, her way of dismissing a painful but tired subject. “It’s not worth mentioning”, it means, “move on.” The phrase became a motto as SCHNEIDER struggled to deal with the stuff that was going on in his life – standard post-tour tedium, relationship problems, a bad motorcycle accident - and he used the music as “a kind of voodoo”, he laughs. It clearly worked, given his good humour now the album is completed.

Life on the road had exposed to him to so many new things that he has no idea where ŠKODA MLUVIT came from, so if you ask him what his influences were he’ll shrug. He stated that Zoomer had been influenced by old soul records, especially Shuggie Otis’ Information Inspiration. ŠKODA MLUVIT, though, is the result of exploring even further the roots of music with which he had fallen in love. Especially evident is a love of dub and afrobeat, but as SCHNEIDER says, “I had no intentions – it just came from inside. But you never forget your roots. And,” he adds, “apart from Panasonic I don’t listen to electronic music at all.”

For the first time he wrote lyrics before he wrote music, articulating things that he had to get out his system. That might be hard to believe when you hear a song like “Caplets”, which riffs on the Instructions For Use from a packet of Aspirin, or the shroom-inspired madness of “Pac Man / Shopping Cart”, but there’s a magic to the lyrics, a logic in the nonsense. “To be honest,” SCHNEIDER explains, “their real meaning often lies between the lines.” He started to obsess over the sound of wood, purchasing, amongst other things, a Ghanian Balafon, and then became increasingly fascinated by the noises he could make with the everyday objects that he found around him. Rather than sample and process them, however, he simply integrated these as he heard them, like trousers being rubbed to make the sound of a shaker. At other times he allowed unscheduled interruptions to remain part of the mix – the telephone ringing during “The Blacksmith”, for example, was completely unplanned.

SCHNEIDER tried to maintain a sense of childish innocence throughout the recording, and much of the album is made up of first takes. “I tried to keep it minimal,” he explains, “ to find the essence of the music, and to find a balance in the chaos.” But whilst the music emerged from a bleak time in his life, that post-Zoomer comedown, he didn’t want it to sound morose. Like the album’s artwork, a simple beauty emerges from a sombre background. “It’s dark,” he believes, “but it’s delivered in a light hearted fashion. It’s not intellectual. But it is spiritual.”

A number of guests grace the album: Edith Kuss, the grandmother who inspired the album’s title, is charmingly integrated into the title track; Max Turner, the Berlin based poet and rapper joins her on the title track and also steps up on “The Blacksmith”, whilst cellist Hildur Gudnadottir (who has previously collaborated with Icelandic act Mum and Angel, Dirk's noise project with Pan sonic’s Ilpo Väisänen) plays a valuable role on a number of tracks. Plus, of course, regular collaborator Kpt. Michi.Gan plays a vital part on tunes like the hypnotic opener “More Time”, which employs mathematical tricks in much the same way as My Bloody Valentine’s “Feed Me With Your Kiss” as it rushes to its final, inevitable conclusion.

“It’s indie rock ragga,” SCHNEIDER jokes of the finished album. Like everything on ŠKODA MLUVIT, that concept is much easier to embrace than you might think.